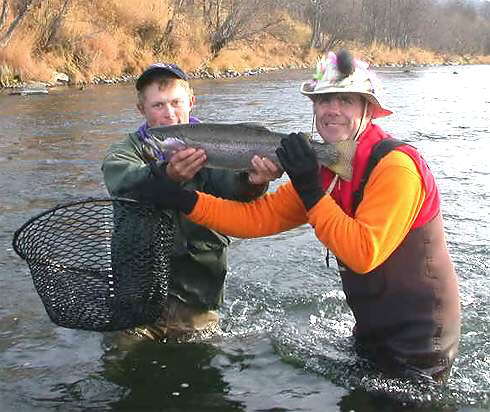 Description: This rainbow is typical of those resident in the Zhupanova River, Kamchatka, Russia. Some I caught were even larger. They average from 28 to 30 inches or even more, and 8 to 12 lbs! Catch and release only. This river flows east into the Pacific Ocean. It contains the largest rainbow in Kamchatka, and, according to the Wild Salmon Center, the largest sized resident rainbow population on earth. There are rivers in Kamchatka where one can catch far more, slightly smaller rainbow 20 - 24". All other species in the river - chum, king, sockeye, silver, arctic and white-spotted Russian char (khundza) are sea-run. There are few, if any, steelhead in rivers draining East. Uploaded: 11/1/2001 by Joe Reynolds

Comments on this Image: (Be first to comment.) You must be registered user and logged in to comment.
Login or Register and you will be returned to this image page.
Want to discuss FlyFishing?
Go to our

message board
on Outdoors Network.